What a couple of days I had when I went down to London to receive my MBE!

The investiture itself was the highlight, it really started when our taxi was allowed to drive through the archway in Buckingham Palace and I couldn’t help but wave at all the school children who were watching on!  Our taxi was directed to the ramp where a member of staff was ready to guide me ‘behind-the-scenes’ and during which she told me that Charles was hosting the investiture.

Mum and Dad was guided to the grand ballroom where the ceremony was taking place and ended-up sitting in the front row opposite where Charles was standing and I could see them via a live TV stream to where all the recipients were waiting to be called to go for their investiture.

Whilst waiting, a staff member approached me to ask if it was OK for Prince Charles to shake my hand!!!  When my name was eventually was called forward and I met Charles, I was touched when he said ‘I believe you invented a most brilliant spoon’ and he asked what other ideas that I had in the pipeline.

Afterwards, there was a long queue for photos, but as soon as I was spotted in the queue, I was ushered through and got my photos taken with my parents outside, fortunately it had dried up by then.  Then the police enquired if we had a car in the Palace and when we told him that we wanted a taxi, he went out and flagged one down and directed him into the Palace grounds (taxi driver thought he had done something wrong!) 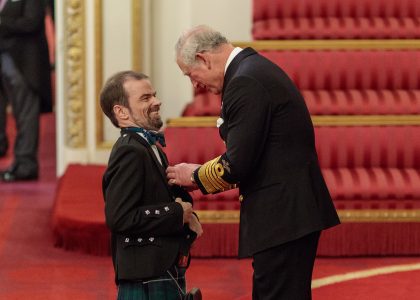 Other highlights included a delicious lunch at the Shard, seeing the musical ‘Kinky Boots’, going to Madame Tussards as well as travelling to and from London first class by train.